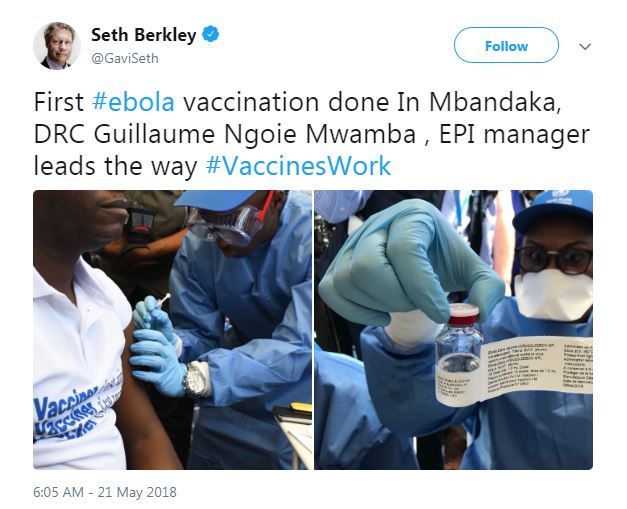 Congo’s recent Ebola outbreak has taken a nurse working against the spread in Bikoro late Sunday night, as international health officials flocked to the city of Mbandaka on Monday to launch an historic vaccination campaign against the deadly virus. The nurse’s death, in the market town of Bikoro, where the outbreak began, brings the area’s death toll to 27.

The World Health Organization has reported that there are currently over 7,500 vaccinations available in Congo, with 8,000 additional doses becoming available in the coming days. A major challenge the relief efforts face is keeping the vaccines cold with the poor infrastructure accessible. The spread of Ebola in to urban areas is a huge concern as the virus can spread much quicker than in rural areas.

Congo has contained several Ebola outbreaks in the past, however these were based in remote rural areas. . Health Minister OLY ILUNGA said there are now a total of 49 hemorrhagic fever cases, 22 of which have been confirmed as Ebola.

(THE HILL) A massive vaccination campaign began in Congo on Monday in an effort to stem an outbreak of the Ebola virus that has spread for more than a month.

The World Health Organization (WHO) and a nongovernmental organization that delivers vaccines, Gavi, said Monday that more than 7,500 doses of a new vaccine had been deployed to the Equator Province.

That practice, called ring vaccination, eliminates or limits the opportunities for the virus to spread. Contact-tracers, the virus hunters who map the web of interactions between those who are infected and those with whom they interacted, have identified more than 600 potential contacts so far.

“We need to act fast to stop the spread of Ebola by protecting people at risk of being infected with the Ebola virus, identifying and ending all transmission chains and ensuring that all patients have rapid access to safe, high-quality care,” said Peter Salama, WHO’s deputy director general for emergency preparedness and response.