Home > Blog > Whats Is “Right to Try” And Will It Help Terminally Ill Patients?

Whats Is “Right to Try” And Will It Help Terminally Ill Patients?

After a year in which President Trump devoted much of his health policy attention to efforts to repeal and replace the Affordable Care Act, Mr. Trump used part of his State of the Union address in January to press Congress to focus attention in 2018 on a new health priority — the passage of “right to try” legislation. It passed, and the president signed it today.

Right to try legislation gives terminally ill patients the right to use experimental medications that have not yet been approved by the Food and Drug Administration.

President Trump’s push for the passage of right to try nationally builds on the efforts of the libertarian-leaning Goldwater Institute, which has used the broad popularity of the policy to help achieve passage of similar legislation in 38 states, although the state legislation differs substantially from the version now on the president’s table.

Despite these state gains and the policy’s growing popularity among states, ethical questions remain about the tangible impact of a federal right to try law on Americans with terminal illnesses. Most notably, a growing body of evidence from policy analysts argues that the legislation would unfortunately accomplish very little change for most patients, and it could actually make it harder to get new drugs approved in the future.

How the drug approval process works 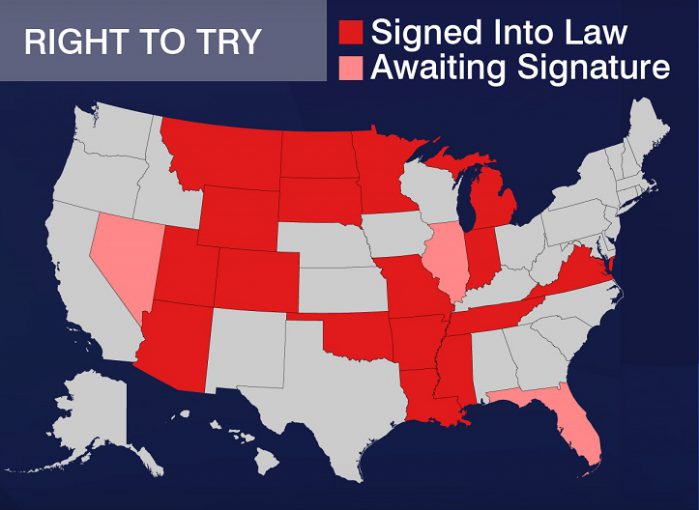 Pharmaceuticals in the United States are regulated by the FDA. When a drug company develops a new compound intended for patient use, the medication goes through three phases of clinical trials that often take years to complete.

The first phase of trials requires a company to prove the drug is relatively safe for humans — that the drug itself will not poison the patient. These phase 1 trials are often conducted on as few as 30 patients.

In later phases, the clinical trials test whether the drug is effective at treating the condition for which it is intended without problematic side effects. It is at this stage that the vast majority of drugs fail to pass approval, because many drugs turn out to be ineffective or to cause severe side effects…